So many of these stories have been coming out lately, its been truly gratifying to stop and take it all in. I thought I'd take a moment and highlight some of the great things mainstream technologies have been doing lately, as reported in the media.

Several months ago, I saw a YouTube video that chronicled the story of Virginia Campbell, a centenarian, for whom the iPad was her first computer. Fox News further detailed that she suffered from Gloucoma, and that the device helped her to see books she had to previously use a loupe to see. She marveled at writing her limericks using Apple's Pages word processing app.

Another interesting development I noticed, involved the iPad being used with Autistic children. One mother created a video of her discoveries, in an effort to help spread the word about the wonderful worlds opening up to her son. As a personal aside, I was really taken aback by how my niece (who has developmental disabilities), took to the iPad app "I Hear Ewe". This says nothing about the legions of other children learning and reading stories on the iPad. It's like a window into another world.

Many parents seem to be using the world "miracle" to describe the marked difference in the degree of engagement their children are having with the new device. Considering the expense traditionally involved in technology on this level, it begins to feel like the start of something special.

My son Leo's life was transformed when a five-dollar raffle ticket turned into a brand-new iPad. I'm not exaggerating. Before the iPad, Leo's autism made him dependent on others for entertainment, play, learning, and communication. With the iPad, Leo electrifies the air around him with independence and daily new skills. People who know Leo are amazed when they see this new boy rocking that iPad. I'm impressed, too, especially when our aggressively food-obsessed boy chooses to play with his iPad rather than eat.

A little over a month ago I came across a story about Austin Seraphin, who purchased an iPhone this summer... something he claims has "changed his life". One of the most under-appreciated technologies built into Apple's iOS, is its Voice Over screen reading capabilities. More than the often gimmicky "haptic" feedback employed by competing OS devices, Apple has implemented something that truly extends its platform past the visual world.

Another blind iPhone user named Victor Tsaran, was only too happy to demonstrate using his new iPhone 4G with a braille display, allowing him to use his new cutting-edge smart phone in a way way that is as powerful as it is effective.

An article on SmartPlanet helps to put a finer point on the details:


Apple really has changed the world in a dramatic way. I don’t know that any of us, even four or five years ago, would have guessed it would have been such a dramatic change. They built the screen reader technology into their operating system. For the Windows environment, there are third-party screen readers that are usually expensive. But Apple put VoiceOver right into the Mac.

Then when the iPhone came out, a lot of us were really frustrated, because there was a touch screen, but it was impossible for us to use. We put a lot of pressure on AT&T (Section 255 of the Telecommunications Act requires manufacturers and providers of phones to be accessible) and Apple to make the iPhone accessible. They promised it would be, and in a year or two, it was. They not only took VoiceOver and moved it over to iPhone, but they changed they way you use the touch screen so it was accessible for someone who can’t see it.

They have changed the world and shown a path that really has surprised and delighted the vision loss community. You can’t go anywhere without seeing iPhones in the hands of blind people. It’s become the phone of choice. 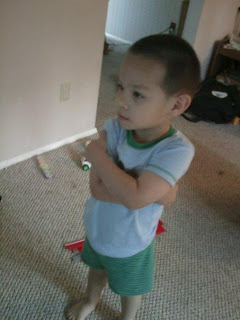 Well, this is my last stop for today. This is actually the article that prompted me to make this post. Yet another parent flabberghasted by the quality of good engineering and UI design. GamingNexus received a post from a contributor named John, who elatedly described Kinect as the best $150 console purchase he's ever made. John concludes his article by writing:


For the first time, I was able to play something with my son and not spend any time with him being frustrated on not being to do anything or have a character get stuck on the screen. He had fun with all the games and actually did well with them. The joy in his eyes as he was able to complete the tasks and move around in the menus is something I’ll never forget.

Kinect isn’t targeted to me, but it’s brought my son into the gaming fold with its intuitive controls and simple games in Kinect Adventures. Even though I haven’t found a launch game that I’m interested in spending a lot of time with alone, I know that I’m able to spend some great time playing along side my son and see him thoroughly enjoying his time on a console.While he still struggles in communicating, I know there’s one thing he can do without having to deal with any of the frustrations Autism has brought upon in his life. And for me, that’s worth much more than the $150 I spent in picking up the peripheral.

On some level, it never seems to be enough. Trying to retrofit accessibility onto technology not already friendly to it often seems a herculean task. It's just refreshing to see that there is well-intentioned innovation happening out there in the most approachable and popular places. As we move towards the future, its an interesting epiphany that we don't have to leave anyone behind. In fact, its calling us all.
Posted by CleverBoy at 6:28 PM 1 comment: